You are here: Home / News / All News / Mark and Rosemary Sedgwick Honoured 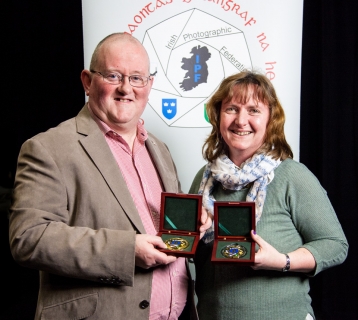 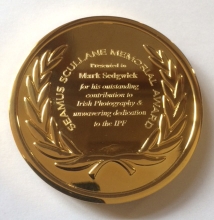 Last month, Mark Sedgwick announced his intention to retire from his roles as a member of IPF council and as Chair of Distinctions. This was a massive shock to us, his colleagues, as Mark has been one of the most dedicated people to the IPF and to the cause of Irish Photography over the years. So dedicated that we kind of assumed that he’d be there for good! At least, I know that I did! Mark has been involved in IPF council for many many years, and in that time has served as President, secretary, chair of distinctions, vice chair of distinctions, FIAP liaison officer, and as a member of countless other sub-committees and task forces. He has been instrumental in helping to shape the IPF into the organisation that we have today. He has always prioritised the needs of the IPF, and the needs of the thousands of Irish Photographers out there above his own. He has been absolutely unwavering in his dedication and commitment, and will be sorely missed by his colleagues and friends in council, as well as by the wider photographic community. 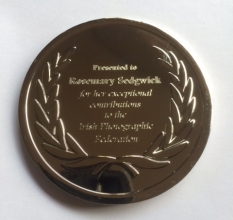 This also then brought Rosemary Sedgwick to mind. Rosemary, Mark’s wife, has been another dedicated, though more silent hero of the IPF. Apart from the fact that Mark’s enormous contribution and magical effectiveness would not have been possible without Rosemary’s help, support and patience, (LOTS of patience!), Rosemary is also a huge contributor in her own right. Because she does not hold any official role within the IPF, it is easy to understand how her contribution would be less visible. Distinctions session after session, event after event, Rosemary has been there. Always willing to weigh in and lend a hand getting things done, and she has spent countless hours making and printing all of our certificates for distinctions and competition awards, year in, year out!

It is no surprise then that Council wanted to mark (no pun intended), the occasion of Mark’s last distinctions assessment sitting on the 5th of last month in Portlaoise. I was delighted on behalf of National Council, and the membership at large to interrupt proceedings to take Mark and Rosemary by surprise, and to present them with 2 extremely prestigious awards in recognition of, and in gratitude for their immeasurable contributions to the IPF and Irish Photography. I’m specifically not saying that we honoured them, because we could never sufficiently pay our debts to Mark and Rosemary. In fact, it is they who have honoured us, for many years, and we, their thousands of indebted friends in the Irish photographic community are just saying thanks.

Rosemary was awarded the Very prestigious Brendan Walkin memorial medal for outstanding contribution, and Mark was awarded the Séamus Scullane award, gold level, which is the highest award that the IPF has at its disposal to bestow upon any member. 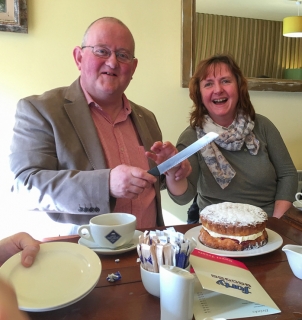 We wish them both the very best of luck and happiness for the future.

To see more images from Mark and Rosemary’s presentation, along with other IPF honorary award winners, please visit this gallery.

The IPF are pleased to announce that the next distinction assessments sitting will be on Saturday 11th March 2023 at the Dunamaise Arts Centre, Portlaoise. Applications are now being accepted via the entry form linked below. Please note that AIPF … END_OF_DOCUMENT_TOKEN_TO_BE_REPLACED

The Annual AV competition was held on 16th Ocrober and I've got a lot of positive feedback today from entrants, attendees and the judges.  We had people from South Africa, USA, Italy, England, Scotland & Wales and from Antrim to … END_OF_DOCUMENT_TOKEN_TO_BE_REPLACED

The IPF are pleased to announce that the next distinction appraisals sitting will be on Saturday 19th November 2022 in Thurles. Please note that we are still dealing with a backlog of print applications, following the Covid period.  … END_OF_DOCUMENT_TOKEN_TO_BE_REPLACED

The Irish Photographic Federation will host the National Club Finals 2022 via Zoom on Saturday, May … END_OF_DOCUMENT_TOKEN_TO_BE_REPLACED

The IPF are delighted to announce a distinction sittings on 20th November 2021. Given the current … END_OF_DOCUMENT_TOKEN_TO_BE_REPLACED